The Furniture People was born from the vision of late Mr. Ismael Maharaullee in 1951 who established his furniture business in Port-Louis. Within years, the family business then known as "Magasin Amdoo" opened two additional showrooms, in Port-Louis and Rose-Hill. Mr. Ismael Maharaullee was recognized for his contribution to the welfare of his region and achievements in 2007 through an official ceremony.

The second generation took over in 1979 through Mr. Mustapha Maharaullee. He set up his first official showroom of TFP at Eau Coulée, which was then known as “Multi-Collection”. A graduate in Furniture Design and Manufacturing at the University of South Bank Polytechnic and London School of Furniture in England as well as a certified member of the Institute of Wood Science, he launched his own factory at Wootun Lane, Eau Coulée in 1980. Since then, the family business started to expand rapidly and throughout the years changed its name to The Furniture People. It became the first Mauritian company to open a factory branch in South Africa in 1995.

We believe in putting our customers' interests first and we believe that our reputation is our most valuable asset. Our craftsmanship is what keeps us ahead of the game and we constantly try to outdo ourselves through innovation. We are a bunch of people who genuinely love what we do and we hope Mauritius will love us for that. 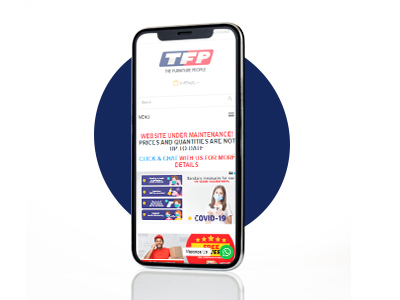 members receive rewards such as

Get an extra 10% off during your birthday month

Get rewards rupees on your purchases